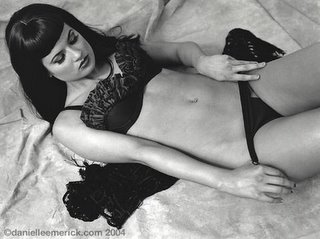 All right, no one needs to LET US do a goddamned thing. This is why I’m telling women to talk charge of themselves and get to know the fine act of self-love. It’s 2006, buddy.
If you men are “sexually starved as it is,” maybe it’s time everyone stop, sit the fuck down, and think about why that might just be. Here, I have a few ideas. Let me share.

You do not just insert your penis and see us crumble into ecstasy. You can’t just rub our clit for 30 seconds and think we’re done. You can’t just work us for the average 14-18 minutes that statistics say the average man lasts. There’s a reason foreplay exists – it’s so that WE orgasm, too.
You may be sexually starved, but you ain’t getting the fucking job done when we do let you at us, in most cases, so why the hell should we bother? Seriously. I’d rather read a fucking book than have lame sex. You want to underperform? Go masturbate, I’m having a bath. Yeah, seriously.
Educate yourselves. Learn what the hell the g-spot is, where it is, and why it works. Learn that less than 30% of women orgasm every time they have sex – and their partners have a good deal to do with the low results, but I’m not suggesting a woman NEEDS to come every time she’s getting laid, but men NEED a reality check on the matter. Learn that less than 40% of women are capable of having an orgasm vaginally. Learn that our BODIES are one giant erogenous zone – not just three regions of it. If you don’t work it, we won’t want it. Period.
You want us to want you more? Learn how to make us shudder. Learn how to tease us, deny us, prolong us, then satiate us. And learn how to have better longevity with your erections. I mean, Christ, it’s a MUSCLE, and very few men ever do exercises to strengthen it, other than masturbating and deflating.

Men, it is in YOUR interest to educate your lover, to educate yourself. By simply having sex in the standard formation – missionary, whatever, for 15 minutes – you’re denying yourself. You’re making your woman apathetic. Women NEED to be titillated or they just won’t care. Men are hardwired to have their dick inside something, we all know this, and that’s a good day out for just about any guy, really, but women, most of us can cope without sex and without you, just fine, and you really, really want to avoid having us feel that way.
When you take the apathetic way out with sex, you’re essentially dining at the sexual taco hut. Sure, it’s a great thing now and then. But there’s a big world out there – homecookin’, upscale, little quickie snacks, and you’re relegating yourself to the same goddamned thing every time.
Women, they’re BORED. And you’re doing nothing to affect it.
The butthead who made this comment, he’s blaming his woman for the lack of sex drive. Take a long, hard look in the fucking mirror, first. And then ask yourself why you’re so damned threatened by the notion of having your woman actually understanding her own sexual organs.
And women, speak the hell up. Why in god’s name do you not?
I was exposed to something at work today that just makes me shake my head at the state of the sexual union. God, things are fucked up in the world of sex these days. I’m not really into the whole reading-erotica/surfing-porn thing. I’m concerned about sex, and that’s why I write all this and seldom visit sex blogs. I’m on a mission, really. I think it’s time we deserve good sex, all the time. I think it’s time we learn to communicate about it.
Masturbation is the starting point. Then talking. Then practice. Then experimentation.
But guys like the above, they just want the third step. All the goddamned time. Unfortunately, these are the men (specifically the sexist breed above, I mean) who will NOT respond to a woman saying what she needs or wants. He thinks he knows, and that she’s just asexual. A good portion of men become excited when their woman wants to actually talk about sex, so don’t let this guy deter you. And if you’re with a man like this, you need to seriously consider whether or not that’s something you can live with – you sure as hell deserve better, but can you live with it? Better yet, why should you?
Jesus, I hate sexism. Thank god most men are smarter than that. You guys, I love, love, love. This guy, I wanna slap.
Someone thought this was an anti-male bashing. It’s not. I’ve been fortunate to have mostly wonderful, considerate, thorough lovers, and I’ve repaid them in kind — like it should be. There are women out there who are lousy, lousy lovers, and they piss chicks like me off, because they lower men’s drives to learn more about pleasing us. Sex takes two, and every position can benefit from mutual involvement. If you’re guilty of the “dead fish” lay-there-and-love me sex, women, smarten the hell up. You’re getting the lousy sex you deserve. I’m gonna rant on YOU on the weekend. I got something else up my sleeve next, to get back on the masturbation topic.