I just finished watching the last 30 minutes of Groundhog Day with Bill Murray, and, well, this is a weird one, but I think it’s one of my favourite romantic comedies.
Right now, I long for a little kissing and lighthearted fun. That’d be nice. Not to be had, but it’d be nice. 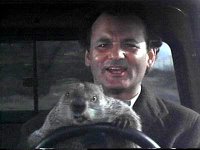 Something about Groundhog Day hits the spot today. I’d realized earlier this week that I’d sunk about as low as I’ve ever sunk. I’m not accustomed to being cruel or mean or angry, and I’ve been feeling that way too much of late. I really, really hate feeling negative things, but acting on them, why, that’s just as low as it gets.
I’m not above fallibility. Wish I was, but I come with the full range of human emotions, from dishonesty through to loyalty, they’re all nestled within me. Normally, my moral compass overrides the bad shit ‘cos I’m typically a very good person. Lately, it’s felt like night and day, depending on my mood.
I seem to be starting to stabilize more. I’ve made the choice that I’m getting off birth control after a couple friends have suggested that this week, which, for some reason, just totally escaped my consciousness as a choice. Throughout ALL the shit that has come down, I’ve been on the pill, and while I consider myself one of the toughest, most resilient people I know, I’ve been anything but that of late. I want to have something to blame, and maybe the pill’s a good thing to use in that capacity. Maybe, though, it really is to blame.
(And while I’m being all hard on myself, don’t think for a minute I’m not impressed with my ability to get through certain things that came my way since June… I’m quite proud of myself in some regards, but I’m disappointed that, in the end, I did start to sink beneath myself.)
I’m supposed to resume the pill tonight, but I’m not going to. Instead, I’ll take a break and let it flush out of my system. Once fall passes and winter dawns, I might decide to resume the pill.*
At the moment, I’m not sexually active, but I still consider going off the pill to be a major pain in the ass because I typically get first-day-of-period cramps that leave me fetally balled on my couch, wincing in agony as my body proceeds to fully explore the potential of cramps. I get the world’s worst first-day cramps. I was once in enough pain that I thought of going to the hospital to get a sedative. I’d really rather not return to those cramps…
…but if the alternative is beginning to hate myself, then I know the choice I need to make. It’s been a week since I’ve had a pill, and since then, I’ve slowly started to climb out of the depressive cesspool that has been home for the last three months — which is coincidentally the length of my last cycle, thanks to the brilliance of trying to suppress my period.
Today’s to be a cycling day peppered by a four-hour stint of work. I have a project to do, and when I’m done, I’m gone, even if that’s less than four hours. I don’t care. Right now, I’ll do what it takes to enjoy myself, because that’s where I find the self-love. If I can have a good time on my own, I can enjoy myself anywhere, any time, and hopefully with anyone. It’s that simple.
Groundhog Day‘s great because Bill Murray also hits self-loathing bottom in that movie. He does everything destructive he can, and then, when that’s through, he seeks to improve himself. Me, I’ve been pretty destructive this past month. One ANGRY woman, man. I’m glad I’ve done nothing drastic because there were moments I was a little nervous for myself. The further I get from it (and I’m not that removed from it yet), the more dark I realize things had been for a while there. I too now wish to improve myself. Steps are being taken and I suspect positive results are already beginning to show in small, inconsequential ways.
I’m sure there are people out there who are forever on an even keel, and I hate them because I’m jealous of them, because I’m not one of them and likely never will be. I tend to be a little more even than this, but there’s often a potential air of volatility to me. That’s a negative, but I often overcome my negatives with my positives — of which I like to think there are many. I’m starting to embrace this difficult time instead of loathing it, because I think I’m heading down the right path — setting up counselling, lowering my expectations, focusing on the little things that need doing so the big things don’t loom so large.
Right now, everything’s worth doing if only it means I stop seeing shadows, you know? Whatever you do, don’t call me Punxsatawney Steff.

*Don’t ever just stop in the middle of a pill cycle or you could fuck yourself over worse than the pills have done to you. Always consult a doctor. I finished my cycle; I’m just choosing not to resume. Despite knowing that I can indeed do this, I’m still seeing my doctor Monday to clue him in and touch base on the evil shit that’s come down in the last few weeks.