As you may or may not know, I’ve been trying to change / suppress my menstrual cycle through the use of prolonged exposure to the Pill. Unfortunately, it’s not going as well as I would have hoped.
For those who haven’t been exposed to what “period suppression” entails, it’s basically the choice to use birth control pills for 12 weeks, then you take a week off. There’s a new one coming out called Seasonale, but I don’t know how that differs from just staying on any old pill, and I doubt the additional hype is really necessary, since I suspect they’re just playing on the ignorance of the public… as most marketers like to do. One can simply take their pill of choice uninterrupted for 12 weeks and achieve the same end. (Now, don’t be a moron and do this shit without medical supervision, all right? Get approval from your doctor, talk to them about what to look for, then go bravely forth, young bleeder. Now your shit before you act; don’t listen to me or some other person who has no medical training and knows fuck all about the big picture.)
I’ve been on the pill, now, for 9.5 out of my new “12-week” cycle. I’ve already had a full-blown, long period that began 2 weeks ago and lasted 8 days, and today I’ve gotten it again. In between, I was still spotting. So, maybe I’m the odd the one out. Maybe I’m the freak who can’t adjust to the hormonal change. I don’t know. All I do know is, this really blows.
I did, however, ask the Good Doctor about it and he said it’s just my endometirum rebelling. Yeah, well, I wanna get fucking medieval on its ass and quash its little rebellion.
I mean, if I was in a sexually active relationship, this would be really fucking annoying. Fortunately, it’s just me and Fingie these days, so we have an understanding and things are going smoothly, no feelings are hurt, but still. Biology blows, man. I thought so in high school and I still think so now. This fucking ranks up there with dissecting frogs, for god’s sake.
I wanted to cycle to work today, but now I feel like shit, so yet another day is passing without exercise. In retrospect, 2.5 cups of coffee was a bad plan, since coffee really fucks with cramping, but at least I’m awake.
I took my first anti-depressant pill last night, and that was weird. It’s supposed to double as a sleep-aid, so you take it before bed.I had only a half a pill as you’re supposed to start slow to minimize the onset of side effects. Still, it conked me right out. I vaguely remember getting out of bed to go to the washroom, as I’m one of those people, and I staggered there with my head bent down, and slammed into the door jamb. My first reaction was, “Not another fucking concussion,” (I’ve had three) as I stumbled backwards, my head smarting, leaving me feeling like I’d suffered a cartoon injury, with the pain lines radiating out into the darkness.
Naturally, I woke up this morning in a fog. I really hope this isn’t an indicator of what’s to come, because now that I’m on these pills, I’m supposed to remain on them for the next year. That’s just the rule of thumb. (Where in the hell did the saying “rule of thumb” come from, anyhow? Ever wonder? I mean, having opposable thumbs is one of the highlights of my life, to be sure, but I don’t expect my thumb to be the sovereign entity of my life, so I don’t really see it ruling, but perhaps my ignorance is impeding my ability to comprehend this. Hmm.) 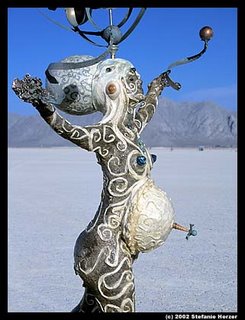 The sky is blue. This I know.
I can be told once in my life that the sky is blue, and I need not be reminded. I may have had three concussions and had bleeding on my brain, but I’m sufficiently clued in enough to be able to recall the blueness of that great big yonder up there. It’s there, it’s bigger than life, and it’s unavoidable.
What I’m not smart enough to remember, however, is just how spiffy I am.
You see, I have these alien invaders in my body that will never, ever go away. They’re from planet Estrogen, and, man, as far as aliens go, they’re a right bitch sometimes.
Unfortunately, there is an entire world filled with people of my ilk who have been invaded by these cosmic cunts, and we’re known as Women. These “Estrogenies” do things to us that we’re not that crazy about. They make us insecure, make us moody, and make us sometimes a little inconsistent. Fortunately, they also make our boobs swell once a month. It’s a give-and-take thing, really.
Guys are pretty low-key. We like that about you. We like the fact that we know we can make you a sandwich, kiss your neck, give you a beer, and you feel like you’re the king of the jungle. Easy-peasy.
We, however, communicate more than you. You, obviously, communicate less. And you’re deceptive. You like to think you’re simple. “I am man. I grunt, therefore I am.” But you’re complicated. You get moody, you get silent, and you internalize. It’s what men do. We understand this.
What we can’t process, though, is the price it sometimes comes at. Men close themselves off, and then by so doing, they also forget to communicate with us about the little things that help to keep relationships moving nice and happy-like.
“You look nice today.”
“Have I told you lately how much you rock?”
We wish we didn’t need to be told that everything’s well and good and we’re still cared about and we still do all the things to you that we did way back when, but we do need to hear these things. And frankly, you need to hear them from us, too. Everyone does.
Compliments and expressions of affection are like yogurt. They have a shelf-life, and while they keep a little longer than you might think, but when they go, man, they go. And then the weird comes down. Insecurities rise, distance ensues, and things get complicated. Relationship mold. Ew.
It’s lame, but it happens. It doesn’t take much to get out of your head sometimes and just remember to say good things about your partner. Keep them secure about how they’re valued, even when you’ve got things going on otherwise. We all get a little too internal, and it’s just not fair to our lovers if we’re all self-involved and failing to acknowledge their worth to us from time to time.
It’s really easy to forget to be communicative about these things when your sex life is going, but at least then you have a physical expression of that affection, and sometimes things can be left unsaid. If you’re not getting physical often, then it’s really important to at least have the communication working, right? Pretty obvious there. 2 + 2 = 4, yeah?
It’d be wonderful if we only had to be told once in our lives that we’re loved, but it doesn’t work that way. The more it happens, the more real it becomes to us. Fleeting suggestions of affection really don’t leave deep imprints on us, and frankly, they often don’t even make a dent. Even worse is, if we’re told how great we are over a period of time, and then time lapses where it ceases to happen much at all anymore, then there’s even greater reason to become insecure.
Put your money where your mouth is, people, and tell ‘em that you dig ‘em. Tell ‘em often, tell ‘em good. If you don’t, you never know, you might just lose what you have, and that’d be a crying shame. Especially if the feelings existed, but your communication simply lacked. The price we pay for these oversights is far too high.
(And, hey, watch out for the Estrogenies, eh?)